Restaurant portions are often excessive, with portions far greater than recommended. This is happening not just in the US, it’s become a global phenomenon! According to the authors of the study, this trend is contributing to the rise of obesity.

This study was performed in Brazil, China, Finland, Ghana, India and the United States, by an international team of researchers, with the support of FAPESP (The São Paulo Research Foundation). Its conclusions are troubling because it points the finger at all restaurant categories. The conclusion is not just limited to fast-food restaurants: in the marjority of cases, the calorie content of restaurant meals is higher than the recommended calorie intake.

You may also like: Why don’t consumers apply nutritional messages

Up to 94% of meals served contain too many calories

The researchers measured the calorie content of a representative sample of 223 popular meals, bought in 11 randomly-selected traditional full-service restaurants, fast-food restaurants and worksite canteens. They were located in the following five cities: Ribeirão Preto (Brazil), Beijing (China), Kuopio (Finland), Accra (Ghana) and Bangalore (India). The study then compared these results with the data from restaurants in Boston (US), taken from previous studies that were performed by Tuft University.

The results demonstrated that 94% of the most popular main courses served in full service restaurants and 72% bought from the counter of fast food restaurants contained more than 600 kcal, the current reference value used by the UK National Health Health Service to combat obesity. The researchers also discovered a significant correlation between portion weight and the calorie content of the most popular meals. The study did not factor in the preparation or the nutritional composition of the analysed meals. 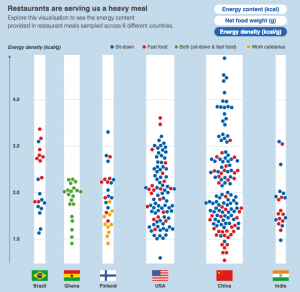 A good guideline: Plant-based food at the centre of new recommendations

According to the study, meals at the selected restaurants and fast-food outlets provided between 70 and 120% of the daily recommended calorie intake for a sedentary woman (approx. 2,000 kcal) except in China, where the calorie count was substantially lower for the most popular meals. Examples include traditional Brazilian rice (841 g and 1,656 kcal per portion); fufu and traditional soup from Ghana (1,105 g and 1,151 kcal); and lamb biryani, which is popular in India (1,012 g and 1,463 kcal).

The results disprove two widespread ideas. Firstly, the fast food meals on average contained fewer calories (809 kcal) than full service meals (1,317 kcal). Secondly, it’s not the quality of the meal but the often excessive portion size that is the problem.

While this study does not by any means defend fast-food restaurants, it does however advocate better training of chefs and cooks so they are more familiar with dietary guidelines, and a better understanding of what is a portion from a very young age.