Download the summary below or read this article to learn more

After a half century of European and North American diets tending towards convergence in their shares derived from plant-based sources, some of these countries are now entering a second dietary transition. Boosted by a growing interest in issues connected to sustainability, this new transition is characterized by an increase in the proportion of plant-based foods in diet.

All human diets draw on plant-based food to a greater or lesser degree depending on peoples’ resources and preferences, these latter being strongly infl uenced by ideology and culture. The proportion of plant-based food in the diet has shifted substantially over the course of the past 50 years; it will likely change just as markedly during the next 50 years.

At a time when prospective studies abound, all drawing attention to the challenge posed by the ever increasing number of mouths needing to be fed on a planet endowed with limited resources and faced with the consequences of climate change, many countries, among them Brazil and Canada, have recently updated their dietary recommendations to highlight the importance of consuming mostly plant-based products. 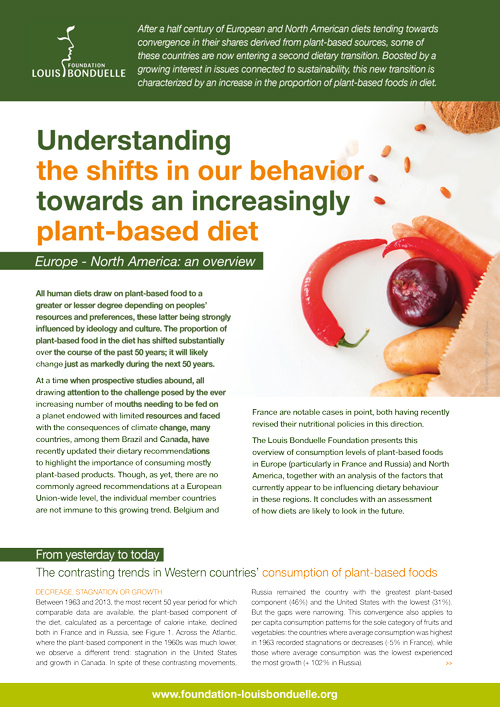 Though, as yet, there are no commonly agreed recommendations at a European Union-wide level, the individual member countries are not immune to this growing trend. Belgium and France are notable cases in point, both having recently revised their nutritional policies in this direction.

The Louis Bonduelle Foundation presents this overview of consumption levels of plant-based foods in Europe (particularly in France and Russia) and North America, together with an analysis of the factors that currently appear to be infl uencing dietary behaviour in these regions. It concludes with an assessment of how diets are likely to look in the future.