How do we regulate our dietary intake? Why are disorders linked to nutrition so common in Western society? This monograph provides an inventory of determining factors in dietary intake and associated disorders, including anorexia and bulimia.

France and Canada are currently revising their dietary recommendations in order to reflect their nutrition situation, food availability and the culture of their country. This is an opportunity to consider the challenges associated with issuing such recommendations through the years: an opportunity we took recently at the Louis Bonduelle Conference 2017 (#LBFconference).

Past: back to the concept

The first “food rules” appeared in Canada in 1942, in the form of Canada’s Official Food Rules. France followed suit a few years later, when the National Centre of Health Education published a magazine dedicated entirely to nutrition. It wasn’t until 1992 that the UN and the WHO formalised the concept of dietary guidelines, at the first International Conference on Nutrition in Rome.

Present: a new dimension to the recommendations 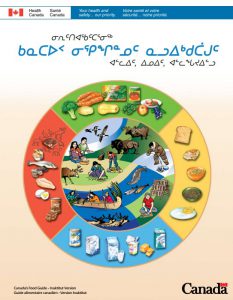 These guidelines are intended to be adapted to the local culture and acceptable to the population. Eating is absolutely a cultural activity! According to the anthropologist Christine Jourdan, food cultures are both the result of different heritages and of the profound changes linked to the evolution of society. Canada’s Food Guide, for example, exists in different versions for specific population groups in the country. The food culture of consumers is made equally clear in the French Food Guide through a series of messages adapted to different eater’s profiles.

In addition to covering nutritional needs, the current guides include a new goal: reducing the populations’ exposure to undesirable substances as much as possible. This approach, known as “risk-benefit”, has become widespread in France and Canada. Furthermore, exercise has also been included in the benchmarks: a concept that is now intrinsically linked to that of nutrition.

Future: towards a sustainable diet

Nutrition in the 21st century must be sustainable and will have to occupy a privileged place in the day-to-day lives of tomorrow’s consumers. 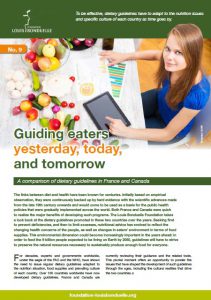 The nutritional quality of a diet and its environmental impact, for example, are in inverse proportion to each other: the more highly recommended a food is, the less its impact on the environment should be and vice versa.  The researcher Marie Josèphe Amiot-Carlin explained that a “30% reduction in greenhouse gas emissions is easy to achieve without drastic changes to our dietary habits”.

To find out more, read the full report: “Guiding eaters yesterday, today, and tomorrow” on the dietary guidelines in France and Canada.

Louis Bonduelle Foundation, Dossier No. 9, “Guiding eaters yesterday, today, and tomorrow – A comparison of dietary guidelines in France and Canada” 2017.