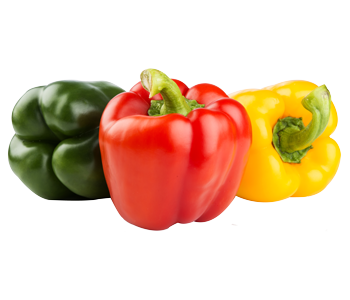 Bell peppers will cheer up any dish! Versatile bell peppers can be used in any number of ways: raw, marinated, roasted, stuffed, braised... A joy for the taste buds and eyes.

Bell peppers are rich in vitamin C, whatever their color. And they continue to be a great source of vitamin C, even when cooked. Vitamin C plays a role in immunity, collagen formation, the nervous system, fatigue reduction and iron absorption.

They have a very high potassium content and are very low in sodium: this gives them natural diuretic properties.

Did you know? The color affects the nutritional benefit. Red bell peppers are very rich in provatimin A while green bell peppers contain more vitamin B9.

When is the right time to eat them?

Bell peppers are annuals that grow well in rich, light, well-drained soil, and in full sun.

To learn everything you need to know about growing bell peppers, read the page on growing tips.

How to store your bell peppers:

How to prepare bell peppers

The skin is not easy to digest. That is why we recommend roasting them, either in the oven or with a blowtorch. You can also peel them raw using a peeler.

All seeds and the white membrane must also be removed.

Raw: Bell peppers are delicious in a salad with feta cheese and olives (Greek salad), tomatoes and mozzarella, a yogurt dressing.

Cooked: Bell peppers are yummy in ratatouille and summer vegetable stews, or stuffed with mincemeat or tuna, or tossed into an omelet for flavor. Grilled, they’re delicious on bread and of course on a skewer with beef, chicken, lamb, salmon, cod, or shrimp.

Did you know? As green bell peppers are not completely ripe yet, they are less easy to digest than the more colorful ones./em>

Children as young as 15 months can eat them, starting with the yellow variety. Danish tots love them.

Some people with cross-allergies (nuts, apples, birch pollen, hay fever) may be allergic to bell peppers. Ask a health professional for advice.

Origins: Originally from Central America, bell peppers were brought to Europe in the 16th century. The main bell-pepper and hot-pepper producing countries are China, Mexico, Turkey, Indonesia, the United States, Spain and Egypt.

Varieties: The pepper family is vast, from large, sweet bell peppers to tiny, hot chili peppers. They vary in shape, size, color and taste. There are dozens of different varieties. Bell peppers with 4 chambers are the most common, and are found in stores in greens, yellows, oranges and reds. They are also known as sweet peppers, peppers or capsicum.

Where do the different colors in bell peppers come from? Bell peppers change color as they ripen: green peppers are picked before they are completely ripe. If left on the plant, they will turn yellow, then orange, and finally red, which is the sweetest.