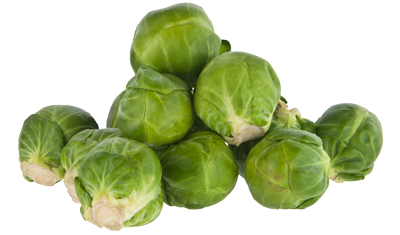 Although they've got a bad image and are often rejected by children, Brussels sprouts are nonetheless an easy-to-use, tasty, and nutritious vegetable.

The vegetable for future mothers

Brussels sprouts are very high in vitamin B9, also known as folic acid, and are recommended during pregnancy to meet the increased requirement for this vitamin. In fact, vitamin B9 is vital for a baby’s healthy development, particularly for brain development during the first trimester of pregnancy.

When is the right
time to eat Brussels sprouts?

In the autumn and winter.

Brussels sprouts are a cold season vegetable. They’re in season from September to December, and some late varieties are still available in supermarket aisles until March.

To learn everything you need to know about growing Brussels sprouts, read the page on growing advice.

How to prepare Brussels sprouts

Prepare Brussels sprouts by first cutting the bottom off and removing damaged leaves, if necessary.

Then cook in boiling water for 20 to 25 minutes to prevent loss of flavor and crunch. They’re cooked when they can be easily pierced with a knife.

A tip for keeping Brussels sprouts green after cooking: Rinse immediately in a bowl of ice water. Serve right away or use another cooking method (fried, purée, etc.)

Brussels sprouts have a strong flavor that goes well with other equally strong flavors. They should ideally be served with rich and/or smoked meats, aged, ripe cheeses like blue cheese, in a stew, with minced meat, chicken, or in a soup.

Served in a salad, braised, or stuffed are simple, low-cost, easy ways to prepare the vegetable, but it can also be added to more sophisticated dishes.

It’s ideal served with potatoes to make stoemp (a Belgian dish) or purées.

It can be served cold as an unusual salad starter with cranberries, walnuts, and Roquefort.

And why not try sweet and sour? Brussels sprouts also go well with apples, chestnuts, raisins, and honey. Why not try it out?

Brussels sprouts shouldn’t be introduced into children’s diets until they are older than 15-18 months because of its strong taste, it can be difficult to chew, or it could be swallowed the wrong way, and because it can be hard on the digestion.

Although often rejected by older children, Brussels sprouts are still an easy vegetable to use in all recipes from the most traditional to the most unusual. Serve cooked, chopped, and mixed into a purée with potato to get children to like Brussels sprouts

As part of a low-calorie diet, it’ hard to beat Brussels sprouts: the effort required to chop, prepare, and chew them no doubt burns more calories than what you get when you eat them!

Some people with sensitive digestion might find Brussels sprouts hard to tolerate. In this case, ask advice from a health professional.