The Government of Quebec has released two detailed reports on changes in the production, trade and consumption of fresh and greenhouse vegetables.

Due to its northern climate, Canada produces a selection of vegetables over a shorter period than its American neighbours. Ontario and Quebec produce the most vegetables for Canada’s fresh market.

Quebec is also the biggest producer of Canadian crops that grow in cooler temperatures. Its muck soils, rich in organic matter, are ideal for growing vegetables. Over 70 species of field vegetables are produced, with lettuce, carrots, onions, cabbage and broccoli dominating the market.

Quebec produces over half of the lettuce, celery, radishes and green onions sold in Canada. Cruciferous (or brassica) vegetables, including broccoli, cabbage, cauliflower and rutabaga, as well as peppers and cucumbers, produce good yields, too. Ontario, which has a milder climate, produces more asparagus, melon and tomatoes. 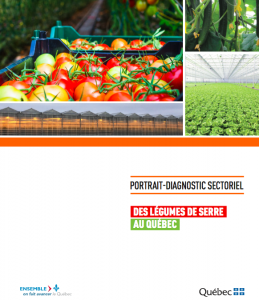 In the last decade, greenhouse vegetable production has expanded in Canada, especially in three provinces. Ontario accounts for 70% of greenhouse area, with British Columbia at 20% and Quebec at 7%. Most greenhouses grow tomatoes, peppers and cucumbers.

The organic market in Canada and Quebec is growing steadily, as it is everywhere in the world, and fruits and vegetables account for the largest share of sales. Nearly a third of Canada’s organic produce comes from Quebec. But most is imported, in particular from the United States.

The controlled environment provided by greenhouses and the harsh Quebec climate mean that pesticide use can be restricted. So the future looks promising for Quebec businesses that have opted to grow organic greenhouse vegetables.

Where to buy vegetables: Many options

Quebec supplies over 90% of local vegetable needs, especially in summer. By storing vegetables, such as cabbages, winter squashes and root vegetables, growers can extend the selling season by several months. To meet the demand, many vegetables are imported in winter from the U.S. But as fruits and vegetables can be produced nine months a year in greenhouses, this method of production is being developed.

In Quebec, vegetables are marketed primarily through producer groups and grocery chains.Many are also sold directly at greengrocers and public markets. Farm stalls and pick-your-own systems, as well as community-supported agriculture (CSA) with Équiterre’s family farmer network, are also flourishing, especially in summer.

Vegetable industry focuses on health and the environment

The 2016 Politique gouvernementale de prévention en santé [government health prevention policy] aims to encourage people to eat more fruits and vegetables. To achieve this goal, many Quebecers must have improved access to a variety of fresh vegetables. This applies especially to people living in food deserts—small, isolated communities and some remote areas that are underserved. Public markets and local distribution channels are a good way to increase supply in these areas.

Consumers may have a positive perception of vegetables, but they have voiced concern about the quality, safety and traceability of Quebec products, as well as pesticide residues. The environmental issue relates directly to how vegetables are grown.

Most vegetable growers in Quebec use a crop residue management system after harvesting. This is a way to fight food waste—something Quebecers care a lot about. However, initiatives such as recycling food waste as animal feed, composting, selling imperfect vegetables and setting up food banks need to be developed.

Although the field and greenhouse vegetable market, in particular the organic market, continues to grow in Quebec, the industry must adapt to society’s demands regarding access, health and the environment.