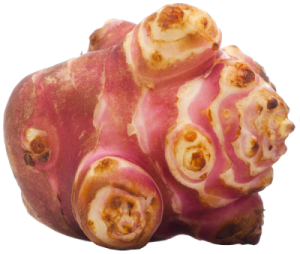 A boon for your digestion!

Jerusalem artichokes are typically winter vegetables. They are available in stores from fall until early spring (November to March).

Jerusalem artichokes (Helianthus tuberosus, from the Asteraceae family) are cold hardy, rhizomatous perennials (i.e. with perennial subterranean stems) that grow well in humus-rich soil, drained and without too much moisture, as well as in full sun or partial shade.

To learn everything you need to know about growing Jerusalem artichokes, read the page on growing advice.

How to prepare Jerusalem artichokes

A small, knotty, crunchy vegetable that looks like a misshapen potato or a ginger root, Jerusalem artichokes have the same texture and refreshing taste as water chestnuts.

Once they are peeled, sprinkle them with lemon juice to prevent oxidation. Note that they are easier to peel after cooking!

They can be eaten boiled, steamed, fried or in soup.

Cooked: They work well in purées, in gratins, or with cream (they can substitute for water chestnuts or potatoes). They can also be eaten fried or add a small, sweet touch to a soup. They pair very well with leeks, celeriac, and poultry. They are also delicious when served warm in a vinaigrette, on a bed of lamb’s lettuce.

Owing to their inulin content, Jerusalem artichokes may be a bit more difficult to digest for young children. Let them try some after 36 months. Older children will love them for their sweet flavor.

Some people may have some digestive troubles when consuming them (e.g. those with irritable bowel syndrome). However, once symptoms have reduced or gone into remission, Jerusalem artichokes will delight the taste buds with their sweet notes that resemble the taste of ordinary artichokes.

Origins: Native to North America, they were cultivated by Native Americans in the region now known as New England (located in the northeastern United States) as well as in Quebec. Today, they are produced in the Netherlands, France, and Germany.

Varieties: Jerusalem artichokes are lumpy tubers. Their white or yellowish flesh is crunchy, juicy and sweet. There are only a few varieties in this category, the best known being “Stampede” and Challenger“.

There are also other varieties with an elongated shape and smooth skin. Enjoying a more subtle taste, these tubers are much easier to peel and are sought after by both food aficionados and anyone looking to make a quick, tasty meal. The best known of these varieties are “Fuseau” and “Volga 2“.

The species Bianka has a white irregularly shaped tuber, which can be harvested in October. Topianka is an efficient species with white tubers. Waldspindal is a very productive species, with long light purple tubers rich in inulin.