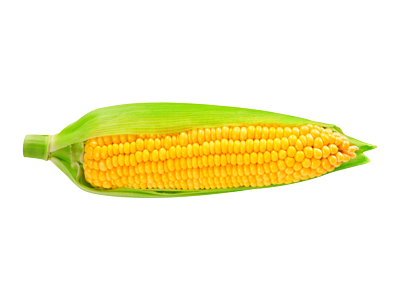 Sweet corn is an unusual cereal because it is eaten as a vegetable. Young and old alike adore this carbohydrate-rich, pleasantly sweet food.

Corn kernels may be small, but they pack a punch! Sweet corn is one of the vegetables richest in carbohydrates and therefore provides quite a lot of energy to those who eat it.

Did you know? Sweet corn contains zeaxanthin, an antioxidant whose name comes from the Latin name for corn: Zea mays!

Sweet corn is available year-round if it is eaten from a can. As for corn on the cob, it is available in summer, from July to September.

Corn is an annual that grows well in full sun, in rich, cool, deep soil rich in humus.

To learn everything you need to know about growing sweet corn, read the page on growing advice.

How to prepare sweet corn

Cooking sweet corn is easy as pie! Canned, it is ready for use. Ears of corn can be cooked in the oven in their leaves and corn on the cob can be boiled in water or grilled.

Canned, it is frequently eaten on salads, for example with tomatoes, lettuce, and cheese cubes. Now that is a nutritious and delicious combination to have as an appetizer or alongside a sandwich. But the possibilities are endless!

Corn on the cob is widely eaten grilled in the United States, where it is seasoned with nothing more than butter and salt. It is the main food served at the traditional Épluchette de Blé d’Inde (corn shucking) festival which takes place every year at the end of the summer in Quebec.

Try it out: pâté chinois. Mashed potatoes cover a layer of canned corn and lean ground beef in this classic, cheap, and nutritious French Canadian dish for the whole family, served with homemade ketchup and a green salad.

Did you know? To each his own! In France, Italy, and Spain, people most often eat sweet corn in composed salads. In North and South America, people prefer their corn on the cob, freshly boiled or grilled.

Children can start to eat sweet corn from the age of 15 months if it is pureed. They should not begin to eat it whole before the age of two. Corn, green peas, and ham make up a trio that older children love to eat. With bright colors and mild, almost sweet flavors, the trio has all the benefits of a balanced meal!

Corn is a cereal but does not contain gluten. People who are gluten-intolerant (with celiac disease) can eat it safely.

Origins: Sweet corn is grown throughout the world, at a latitude promoting its ideal climate, which encompasses southwestern France, southern Quebec, the northern United States, and Thailand. The United States is the top corn producer, followed by China, Brazil, Mexico, Argentina, and India.

Varieties: There are three varieties of sweet corn:

What we often call “baby corn” is actually immature corn on the cob. It is delicious in salads and stir fries.