A Montréal neighbourhood has developed a local food system that includes mobile markets, in an effort to combat food deserts.

Food deserts in the middle of the city

It is now well established that food environment quality has a direct impact on health: a lack of access to healthy food, such as fruits and vegetables, is an important determinant of health problems. This becomes an even greater issue when it comes to low-income people. In addition to living in food deserts, families with financial problems will tend to choose foods with a better cost / satiating effect ratio. So, naturally, fruits and vegetables do not feature on their shopping list. 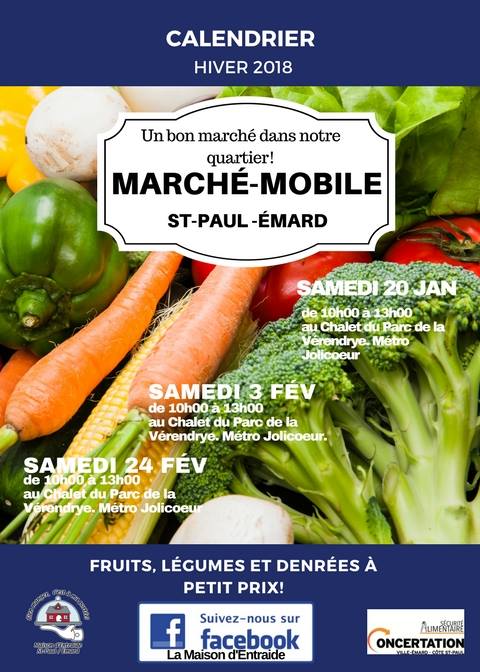 To address the neighbourhood’s food desert, Concertation Ville-Émard/Côte-St-Paul decided to adopt an integrated approach. “Specific actions had been implemented across the neighbourhood, but they weren’t really connected,” explains Assia Kada, the organization’s general coordinator. “To be more effective, we decided to completely rethink the food system.”

To build on the collective and container gardens already in operation, the organization created a green roof and vertical gardens on the building that houses the community grocery store.

Mobile markets are also emerging throughout the neighbourhood. “We set them up close to residents: at the exit of the Jolicoeur metro station, outside Habitations Montmagny (low-income housing units) and in the area where Opération GALT, an urban revitalization project, is being implemented.” The five mobile markets draw 100 to 120 people once or twice a month throughout the year. “Residents can buy fresh fruits and vegetables coming directly from local producers, as well as products from wholesalers that are sold at purchase price.”

On the education front, every opportunity to help people discover and eat fruits and vegetables is valuable. “We organize cooking and urban agriculture workshops, as well as documentary nights. We also invite residents to sample dishes at our mobile markets and we give out recipes.”

Le projet Fruits et légumes pour tous is a winner of the 100° call for proposals, “S’approvisionner autrement: fruits et légumes à l’année pour tous!” [Sourcing differently: Fruits and vegetables all year round for all!], conducted in partnership with the Louis Bonduelle Foundation.

100° is the reference for healthy living in Quebec.