We need to eat every day. Our ability to access food is closely linked to the different stages of the supply chain. First, food is produced by farming and processing. Then, it needs to be stored, transported and made available for consumption. The length of this supply chain can vary. It all depends on the distance between production and consumption. 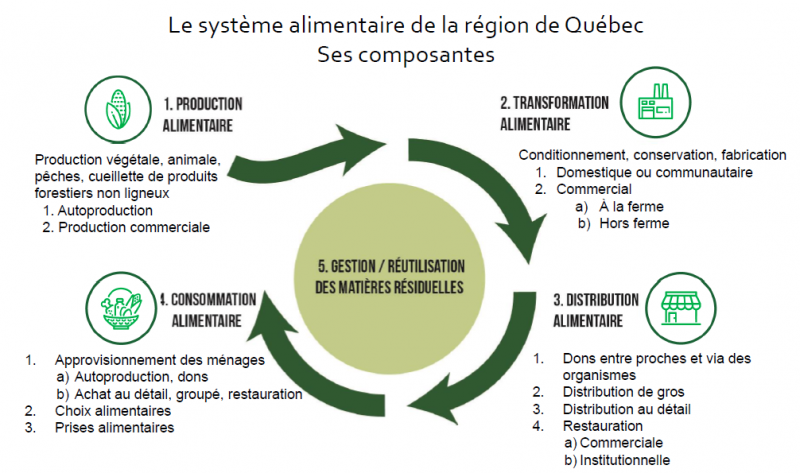 The research project “Moving toward a territorialized and sustainable food system: A participatory research project to understand Quebec City’s food system” () involves a partnership between an interdisciplinary research team at Université Laval and 14 government and non-government organizations in the Capitale-Nationale and Chaudière-Appalaches regions.

The two regions studied, the Capitale-Nationale and Chaudières-Appalaches regions, are home to 7,000 farms and account for nearly a quarter of farms in Quebec. Since the 1960s, the number of farms has halved while their average area has more than doubled in the greater Quebec City region. The trend is similar across the province.

In the Capitale-Nationale region, the main production is fruits and vegetables, and greenhouse crops (22% of farms), while in the Chaudière-Appalaches region, one in five farms (19%) is primarily dedicated to milk production.

Self-production completes the agricultural landscape with 25% of people in the agglomeration of Quebec City growing vegetables at home or in a community garden. With urban agriculture growing across Quebec, the authors think commercial urban gardens will flourish in years to come.

Are local products too expensive?

Three quarters of people in the agglomeration of Quebec City say they buy food that was produced or processed fewer than 80 km away at least once a month.

Local products bought are mainly fruits and vegetables—nearly half of them in the summer.

Consumers are keen to buy local but say there are a number of obstacles to doing so; in particular, there aren’t enough products, and they’re expensive. But according to a study conducted by Équiterre in 2012, eating local doesn’t have to be expensive.

The study authors sought to calculate the balance between productive capital and needs. They concluded that Quebecers in the regions studied, as is the case across the province, produce about 38% of the calories they consume.