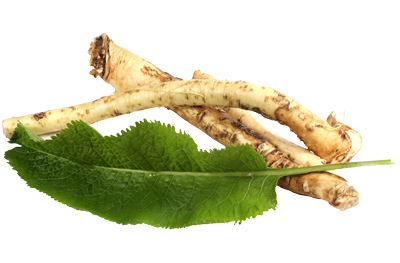 Horseradish and Japanese wasabi are vegetables in the crucifers family. Their roots are used as condiments to add spice to recipes.

Low in calories but denser than red radishes, horseradish is very high in vitamin C (for immunity, collagen formation, energy, the nervous system, and iron absorption, and for fighting fatigue) (link). It has twice as much as oranges and much more than kiwis!

Horseradish is not eaten in very large quantities, so its highly beneficial nutritional qualities complement the daily value in nutrients covered by main meals.

Horseradish is in season from September to March.

Horseradish ((Armoracia rusticana, in the Brassicaceae family) is an herbaceous perennial that grows well in fresh, rich, stirred soil rich in humus, in full sun.

To learn everything you need to know about growing horseradish, read the page on growing advice.

How to prepare horseradish

Horseradish is available fresh (though rarely); it is more often sold prepared, pickled in vinegar.

When fresh, it should be peeled (watch out—it will make you cry even more than onions!), and the hard, fibrous parts and green parts in the center should be removed. It should be grated at the last minute so it keeps its characteristic pungency, then sprinkled with lemon juice so it remains white in color.

Horseradish is rarely cooked, and should be added at the end of cooking if it is.

Raw: Grated or in a paste, horseradish is used as a condiment. It has a very strong flavor, both spicy and peppery. It sets off dishes with a delicate flavor, like cold poultry, white or red meats served cold, or cold cuts. Horseradish pairs very well with beets, grated carrots, red cabbage, beef, smoked fish, goat cheese, and shellfish, and adds a subtle elegance to tomato juice.

It is frequently eaten in Germany and the French region of Alsace and is used in Eastern European countries to go with sauces. That’s why it is also often called “German mustard”.

In England, a sauce of horseradish, vinegar, and cream is served with roast beef.

Horseradish is widely eaten in the United States, as it is in the Jewish community, where it is eaten with gefilte fish and served during holiday meals such as the Passover seder, for example.

Japanese wasabi: Horseradish is an essential ingredient in Japanese cuisine, eaten in the form of wasabi, notably alongside raw fish. Be careful—wasabi burns, and unlike with mustard, you feel the spiciness first in your nose!

Children do not appreciate the spicy, peppery flavor of horseradish before the age of two. They should try out small quantities, as with all other condiments.

People who are very sensitive to spice may enjoy horseradish more when mixed with crème fraîche for a milder taste.

Origins: Native to Eastern Europe and Asia Minor, horseradish has been known to humans since 1500 B.C.E.

Varieties: Horseradish is a plant with large leaves and small white or yellow flowers. Horseradish plants are divided by splitting the root; it is also the root that we eat. Wasabi is a variety of horseradish.