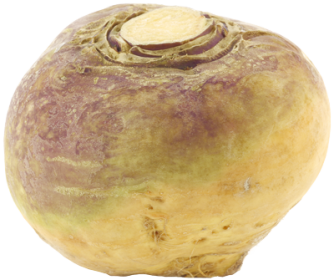 Rutabagas are sometimes confused with turnips. However, their flesh is yellower. They are also called "chou de Siam" (Siam cabbage), and can be cooked like potatoes.

A vegetable that’s worth a new look

Famous for having prevented famine in times of war, today rutabagas are well-liked for their delicate flesh. Their fiber content contributes to regular bowel movements, and they are a natural diuretic. In addition, they are low in calories.

Rutabagas are the ultimate winter vegetable. They are in season from October to March.

Rutabagas are shaped like large turnips. Their skin and flesh are yellowish and sometimes white. They have a strong flavor and a slightly earthy smell. This fall vegetable can tolerate light frosts, which actually enhance its flavor.

To learn everything you need to know about growing rutabagas, read the page on growing advice.

How to prepare rutabagas

As with turnips or potatoes, they only need to be peeled.

They are easy to work with and can be cooked like potatoes: puréed, fried, oven-cooked, roasted, sautéed, used in croquettes, etc.

Cooked: They are most often eaten in vegetable soups, but they can also be eaten on their own, as a side to a meat dish for example. A classic French dish, pot-au-feu is always prepared with rutabaga (or turnips) to enhance its aromatic composition. Rutabaga gratin is likewise delicious.

Children can try them starting at 12 months. Their bitterness can be slightly reduced by adding a little sugar during cooking.

People with irritable bowel syndrome may experience discomfort when eating rutabaga. This is generally short-lived, and rutabaga may be gradually re-introduced when symptoms are light or during remission.

Origins: Rutabaga is produced in Scandinavian countries, Germany, the Netherlands, Canada and the United States.

Varieties: The term “rutabaga” stems from the Swedish rottabaggar, which translates to “cabbage turnip”. In Quebec, this vegetable is sometimes called “chou de Siam” (Siam cabbage), an old term formerly used in France and thought to have preceded its current name, since it is listed in the 1798 dictionary of the Académie française. It is also often confused with the turnip. However, rutabagas differ from turnips in color, flavor, shape and tops.

It would appear that rutabaga originated from a cross between a member of the cabbage family, possibly a kale and a turnip (hence the name cabbage-turnip it is sometimes given). This hybrid likely occurred in Scandinavia, as the first specimen was discovered there in the late Middle Ages. It was not mentioned in print until 1620, when a Swiss botanist described it in detail.