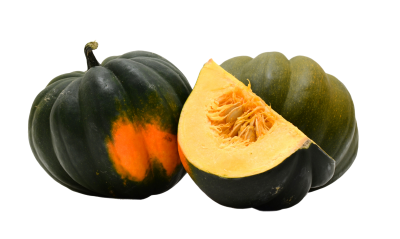 The large squash family puts sun in our plates, whatever the season. Their variety of shapes and colors as well as taste makes squashes a succulent choice in both savory and sweet dishes.

A feast for the eye!

Squash contains a good amount of lutein and zeaxanthin, two antioxidants that help to protect the retina, a sensitive eyesight organ.

But their high season runs from October to January, as squashes are mostly winter vegetables, with the notable exception of zucchini and pattypan squash, which are eaten in summer.

Squashes (Cucurbita pepo, maxima, melopepo, moschata) belong to the cucurbit family. They are sensitive to cold.  Squash is sown at the end of spring, from the end of May till the beginning of June, when the frost period is over. Autumn frosts are also very harmful to the plant.

Squashes need lots of space in the vegetable patch: the bigger the fruit, the more ground space needs to be set aside for it. The recommended spacing between rows is about 2 to 2.5 m, and 0.5 to 0.6 m between seeds in a row. Moist soil is ideal for optimum growth of the plant and fruits. And in order for the fruit to grow, female flowers must be pollinated by male flowers. An average of one or two fruits per plant is obtained depending on the variety of squash. For miniature squashes like Baby Boo, Sweetie Pie, Jack-Be-Little and Munchkin, a single plant can produce 12 to 15 fruits.

To learn everything you need to know about growing squashes, read the page on growing advice.

How to store your squash:

How to cook squash

Don’t peel squash, especially the summer varieties (zucchini and pattypan). The skin is tender after cooking. Cut it in two and remove the seeds. Summer squashes can be eaten raw or cooked. They can for instance be served in a salad, roasted in the oven, sautéed in a frying pan, and even baked.
Winter squashes are eaten cooked only.

Raw: Grated like carrots, or sliced in thin strips, squashes can make surprising and original starters. They go well with fresh herbs, lemon and fruit, and fresh cheese.

Cooked: Squashes are delicious in a soup, especially with carrots and ginger. They also go wonderfully in risottos, stews and curries. They are great either baked or pureed – try personalizing them with maple syrup, rosemary, walnuts, garlic, etc.

Spaghetti squash is excellent with tomato sauce: the effect is stunning!

Anti-waste tip! Don’t throw away the seeds. First blanch, then roast them. Season and serve as an appetizer or on a salad.

Children from the age of 12 months will enjoy them in a soup or puree or in desserts (cakes, sweets, pies, stewed, etc.).

See plenty of other tips for encouraging children to eat vegetables.

Origins: People already consumed them in Mexico some 7,000 years BC, and squashes and zucchinis are a widespread tradition in the United States. Amerindians have for ages used a complementary, mixed farming technique called “three sisters”: corn, beans and squash are planted together so that each plant contributes to the growth and survival of the other two. Today, squashes are mainly grown in China, India, Russia, Iran, the United States, Egypt and Ukraine.

Varieties: Cylindrical, round, elongated, white, green, yellow, beige or orange, and whatever their size, squashes are astoundingly diverse.

Several varieties are known and grown:

Among these varieties, two general categories are found:  summer squash, and winter squash.

Summer squashes have thin skins; they are more fragile and cannot be kept as long. They are picked very young and unripe (green and yellow zucchini).
Winter squashes can be kept longer and their flesh is sweeter, dryer and orange-colored (pumpkin, red kuri).