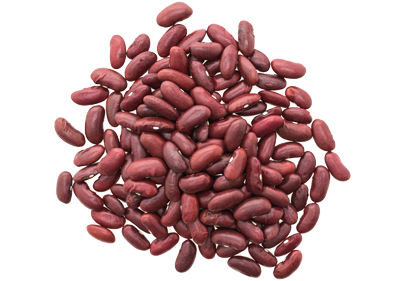 Rich in protein, red kidney beans are well-liked for their sweet flavor and light texture. These dried beans are some of the most frequently eaten in the world.

A healthy and cheap source of protein!

Like all dried legumes, red kidney beans are among the plant-based foods that are richest in protein, yet unlike animal proteins, they are still fat-free.

These two characteristics provide major health benefits, contributing to a balanced, low-cost diet and with a low environmental impact!

Red kidneys are rich in potassium and low in sodium, naturally giving them diuretic properties.

Red kidney beans are available year-round, because they are eaten dried and usually canned!

Red kidney beans are annuals that can be bushy or climbing. Each pod holds four to twelve seeds. Red kidneys grow well in light, rich, deep, aerated, well-drained soil, in a hot and temperate climate.

To learn everything you need to know about growing red kidney beans, read the page on growing advice.

Why should we increase the amount of plant-based protein in our diet? Find out here

Do you have some red kidney beans left over? Put them in a salad to give it more texture. Or use them for a vegetable soup, or a cold, gazpacho-style soup with some tomatoes and a bit of onion.

What can you do with the water you use  to cook red kidney beans? Whisk it vigorously until it forms a foam. You can then use it like egg whites that have been whisked into peaks to make a delicious chocolate mousse!

What is the environmental impact?

*Data taken from the Agribalyse database, which gives the environmental score of foodstuffs. This unique score is the average of 16 indicators, calculated using the European methodology PEF. It is not the same as an environmental label or “eco-score”.

How to prepare red kidney beans

Like most dried legumes, they need to be soaked in cold water overnight before being cooked. Cooking times vary depending on their size and range from 30 to 90 minutes in boiling water.

If they are canned, you can add them directly to your dishes. They can be eaten cold or lightly reheated.

They are well-known as one of them main ingredients of chili con carne, literally “chili with meat.” Contrary to popular belief, this internationally renowned dish is not native to Mexico but instead hails from the southern United States in the pure Tex-Mex tradition, with red kidneys, tomatoes, meat, onions, and spice.

Vegetarians can leave out the meat (chili sin carne) and eat the chili with bread for plant-based protein balanced between dried legumes and grains.

Chatrou fricassee is a national dish from the French West Indies made of red kidneys slow cooked with tomatoes and spices, to which octopus pieces (chatrou) are added.

Finally, red kidneys can also be a good base for salads, for example with shallots, garlic, tomatoes, olives, and a spicy vinaigrette (the same ingredients as in chili, but cold!).

Red kidney beans can irritate the bowel, be difficult to chew, and present a risk of pulmonary aspiration. Therefore they should not be given to children before the age of 15 months.

To fully benefit from pulse proteins, eat a grain product or nuts and seeds along with red kidneys.

They are rich in lysine (an amino acid) but have very little methionine (another essential amino acid). As for grain products (wheat, rice, etc.), nuts, and seeds, they contain essential amino acids that pulses lack or contain only in small quantities. So the two together means that our food is an excellent source of protein, even without meat, it is a winning combination!

Origins: For thousands of years, dried beans, along with corn, have been the dietary cornerstones of the Americas, where people continue to eat them today. Red kidneys are one of the most consumed foods in the world.

The main dried bean producers are Myanmar, India, Brazil, China, the United States, Tanzania, and Mexico. Around 85% of dried beans are eaten in their country of production. Latin America has the highest rate of consumption per capita, mainly of colorful pinto beans, black beans, and red beans.